“…the disc has a full, echoing quality that enhances the music and gives the recording a magical sound.” -The Morning Call 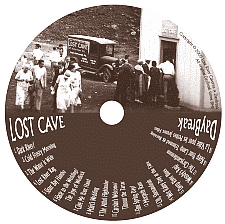 When we were given the opportunity to make a recording inside Lost River Caverns in Hellertown, Pennsylvania, it became a chance to capture some music we have been playing for a long time but have never recorded. We also created some new music just for the cave. The project provided impetus to record with our children (they grow up too fast). LOST CAVE was a quick venture, taking about four months from concept to completion…Our previous recording took ten years!

Read more about our cave experience and see some pictures here.

Cold Frosty Morning : A.J. Bashore II introduced us to this slow reel. He plays his mountain dulcimer version first and then we all join in.

The Water is Wide: Emily and Trudy bring years of choir experience to this traditional English song.

Sister Bay Hambo: Anna Lisa and Rob learned this hambo in 1984 when playing for a dance band in Elkhart, Indiana. We thought for years that the frolicsome piece was traditional, but then unearthed the score in an old notebook. We’ve since spoken with the composer, Gerhard Bernhard, who wrote the piece for dances in Sister Bay, Wisconsin. When danced, hambos are played with a strong upbeat.

Haste to the Wedding & The Joys of Wedlock: DayBreak has been playing these pieces since our beginnings. We have guided several happy couples to and from the alter with these rollicking Irish jigs.

Give Me Your Hand: Written in 1603 by Ruainn Dall O’Catháin. Rory Dall, as he was commonly known, was an Ulster harper who did most of his composing and playing in Scotland. He wrote this air as a peace offering to a noblewoman who’d wronged him, and it became one of the pop tunes of its day.

The Athol Highlander: This rollicking jig presumably commemorates a highlander from the Blair-Athol region of Scotland. Trudy’s cello fiddling technique is featured on this four part A-mixolydian jig.

Carolan’s Welcome: This Irish air by Turlough O’Carolan (1670-1738) fits nicely into our baroque ensemble of harp, violins, cello and dulcimer. It appears untitled as tune 171 in O’Sullivan’s biography of O’Carolan, but is commonly known as “Carolan’s Welcome” since being used to welcome the Pope to Dublin in 1979.

Timour the Tartar: A Scottish reel whose namesake was Tamburlaine, a Mongol Turk warrior.

Fine Spring Day: Cliff wrote this back in the early days of DayBreak, and it became part of our first recording, “Dawn.” This is a fresh arrangement of the piece with two hammered dulcimers, mandolin, cello, and Lydia’s playful djembe rhythms.

Morpeth Rant: A rant is dance that was popular in Northern England, similar to a reel. The dance involves close movement so it can be performed in small areas. Seth starts off this rant, which was composed in the 18th century by Northumbrian musician William Shield.

Oh, Shenandoah: This traditional river shanty came from British Isle immigrants to Virginia. Sung by Boatmen as they rowed and labored on river barges.

Wet Rainy Day at the Faire: This title came to A.J. Bashore II while driving through misty rain to perform at the regional Children’s Miracle Network Telethon. This four-part jig melody is played only on the melody strings with ample use of traditional drones. Listen for the musical drips in this sweet, soggy piece.

Deep River Blues: Cliff’s finger-style guitar and Emily’s singing are joined by Rob Fedorczyk’s tasty slide licks on his Dobro® resonator guitar. The three have been playing together as “Glass Roses”.

Woody’s Rag: According to Mr. Guthrie’s copyright, “anybody caught singin’ it without our permission will be mighty good friends of ourn, cause we don’t give a dern. Publish it. Write it. Sing it. Swing to it. Yodel it. We wrote it, that’s all we wanted to do.” So we did.

The Chrysanthemum: This wonderful Scott Joplin ragtime piece was originally written for piano. We transposed it to keys more suited for the mandolin and guitar. Anna Lisa was inspired by Norman and Nancy Blake to try this on her 1984 Flatiron mandolin, but we decided to keep Joplin’s original modulations – Sample below

La Valse pour les Petites Jeunes Filles: Anna Lisa and Rob first fell in love with this Waltz for the Little Girls when Dalglish, Larsen & Sutherland performed at Goshen College in Indiana. Good friends played a violin and harpsichord version for our wedding processional in 1984. At the time, we never dreamed that a beautiful daughter would one day join in with her own impromptu cello harmonies.