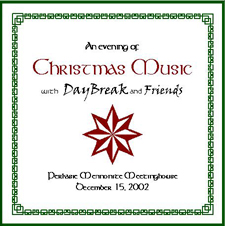 Many thanks to all those who helped make this evening of Christmas music possible through publicity, stage setup, and encouragement. Thanks also to Perkasie Patchwork Coffeehouse for promoting this concert at its performances.

Our deepest gratitude goes out to the musicians who joined us for this concert. Thanks for making this a unique Yuletide celebration.

Saint Colmcille, sometimes called Saint Columba, was born at Gartan, Co. Donegal, in AD521, the son of a chief related to several of the princes then reigning in Ireland and in the west of Scotland. In 546 Echen Bishop of Clonfada ordained Colmcille a priest. Later that year he founded his first monastery in Derry on a site that was given. It was Colmcille’s monks who many years later produced the Book of Kells.

In 561 accompanied by twelve disciples, he left Ireland for the little island of Iona and founded a monastery there in 563. Many people were attracted by the lives of the monks on Iona and came to Colmcille for advise. Colmicille and his monks built a fleet of boats and in these they set out in all directions from Iona. They travelled to the mainland and the nearby Scottish islands and the north of England teaching and preaching, building 56 Churches and schools. For this reason Colmcille is called the Apostle of Scotland.

St. Jean de Brebeuf was a missionary who worked with American Indians along the banks of Lake Huron in Canada. His courage is legendary up until his gruesome death in 1649. He wrote this hymn of Christmas in a way that could be understood in the American Indian culture.

Emily’s spirited composition asks, “What shall we do when the King comes.”

This carol’s chorus implores us to ring the bells. It tells of Mary and the infant tender.

This simple, lovely Appalachian mountain hymn sung traditionally here, with the leader lining-out the text and the congregation joining in naturally. Note that the congregation adds there own harmonies to fill out the chords in this piece.

Nothing But a Child — Steve Earle
Jerry – guitar & voice