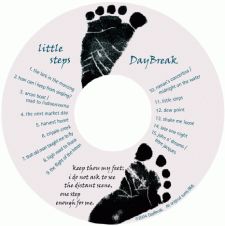 Little Steps was recorded at MorningStar Studios in Springhouse, Pennsylvania. Engineered and recorded by Glenn Barratt and Thomas Petroski, Jr. Mastered by Glenn Barratt. Produced by Cliff Cole and DayBreak. The cover photo of Seth’s little steps into the Atlantic is by Anna Lisa. The CD graphic design and layout is by Rob.

Cliff’s hammered dulcimer was built by James Jones of Bedford, Virginia. His website is www.jamesjonesinstruments.com.

Anna Lisa’s mandolin and bouzouki are both flat-top koa models made by Flatiron, formerly of Boseman, Montana. Her violin is a good old German copy of a Guarnerius. Rob and Anna Lisa made their walnut and spruce mountain dulcimer back in 1983 from a Folkcraft kit . The concertina that Rob plays is an English style Bastari. Rob made his first guitar, a 000 model now owned by Cliff, back in 1996. He made the Dreadnought he plays on Little Steps from a maple Martin kit in 1998. Rob and Anna Lisa’s sister, Chara Histand, made their harps together in ‘97.

Rob’s harp is a butternut, maple, and spruce, Paraguayan-style 36-string harp, built from the plans and video of harpmaker John Kovak from Front Royal, Virginia. You can find John along with his harps, harp plans, videos, and recordings on the web at www.johnkovac.com. Denis’ guitar is an 1981 Alvarez made by Kazuo Yairi. He plays Feadóg and Generation tin whistles.

Cliff – hammered dulcimer, Denis – bouzouki, Anna Lisa – violin, Rob – bodhrán
Two pipers (or was it two fiddlers?) sustained a night-long contest over who could compose the best tune. When morning came, they conceded to the Lark and commemorated its song with this jig.—Anna Lisa

Cliff – hammered dulcimer, Anna Lisa – violin, Trudy – cello, Rob – voice & guitar
This 1869 hymn by Lowry was included in the newest Mennonite/Brethren hymnal, Hymnal: A Worship Book, and it has become one of our favorites.—Rob

Cliff – hammered dulcimer, Denis – tin whistle, Anna Lisa – mandolin, Rob – voice & guitar
Our friend, Ray Hunsberger, brought me new inspiration by giving me an old Irish art song book he ran across. I found this tune there. Denis suggested that I capo my guitar and play the Em in Dm position. This gives the ballad a more urgent, plaintive sound.—Rob

That Old Man Taught Me to Fly (3:16)
Cliff – hammered dulcimer
I wrote this tune in honor of Don Koch, who was my mentor at AT&T Bell Labs. Don taught me how to test integrated circuits, using big complex machines called “Automated Test Equipment”. Don had a gruff exterior which I was able to break through, and he taught me many things about testing. Don was not college educated, however there was not a question about testing that he could not answer. We often referred to our mistakes as “pilot error”, thus the name of the tune. Unfortunately years of chain smoking caught up to Don. I cried when I heard that he had died. I add a more percussive quality to this tune with my dulcimer’s built-in damper system.—Cliff

Cliff – bongos, Anna Lisa – violin, Denis – bouzouki, Rob – mountain dulcimer
This tune is dedicated to the wonderful people of Tibet. Anna Lisa and I had a fascinating stay in their occupied homeland and continue to remember and share their hope for independence. I strove in this piece to capture bits of the raw beauty, ancient mystery, crispness, spirituality and courage we found there. I am intrigued by the fact that a truly American instrument such as the mountain dulcimer can take on such an exotic quality. On the third stanza, Anna Lisa’s violin recreates this tune by introducing a haunting counter melody. The ringing heard at the end of the tune is, fittingly, a Chinese funeral bell.—Rob

Cliff – hammered dulcimer, Denis – tin whistle, Anna Lisa – cello, Rob – bouzouki
Since the first time I saw one, I have been fascinated by the great blue heron, a fine and majestic bird with prehistoric features. I wrote this piece in honor of this great bird. Denis’ fine whistle playing soars on this jig.—Cliff

Roman’s Concertina (4:37)
Cliff – hammered dulcimer, Anna Lisa – mandolin, Rob – voice & guitar, Emily, Lydia, Trudy, & Seth – voices
My Amish-come-Mennonite grandfolks, Roman & Emma Yoder, held barn dances for the church youth. It was said that my grandpa was the only one who could play as fast as my grandma could dance! Our children join me on the refrain.—Rob

Midnight on the Water (4:03)
Cliff – hammered dulcimer, Anna Lisa – fiddle, Rob – concertina
We had to follow up “Roman’s Concertina” with a good old American waltz featuring the concertina. As a teenager, I first heard this tune played by the great bluegrass guitar player and band leader, David Bromberg. The colorful old French fiddle played here by Anna Lisa was one of her father’s great auction finds.—Cliff

Cliff – hammered dulcimer, rain stick & chimes, Rob – bouzouki, Tom – synthesizer bass
I wrote this tune with the help of Seth, who as a toddler took an interest in my hammered dulcimer. To demonstrate its sound, I randomly hit a few notes. The riff that emerged became a wonderful piece full of possibilities. Many endeavors, musical or otherwise, are often a series of little steps.—Cliff

Cliff – hammered dulcimer, Anna Lisa – violin, Rob – guitar
I like to think that my tune evokes that time when dew begins to settle onto the fresh grass.—Rob

Shake Me Loose (5:09)
Rob – voice & guitar
I am very blessed, but sometimes I still yearn for a deeper level of passion within myself.—Rob

Cliff – hammered dulcimer, Anna Lisa – bouzouki, Rob – paraguayan harp
Not long after I built my harp and started teaching myself to play, I wrote this song, well, late one night.—Rob

Cliff – hammered dulcimer, Anna Lisa – viola, Rob – voice & guitar
Bill Caddick’s lyrics were set to a sweet arpeggiated melody that some will recognize as a passage from Tchaikovsky‘s Symphony No. 6, The Pathetique. These mellow strains originated in a Russian folksong.—Anna Lisa
Words by Bill Caddick; Music by Bill Caddick, adapted from Tchaikovsky; Published by Rough Music.

Frère Jacques (5:55)
Cliff – hammered dulcimer, Anna Lisa – mandolin, Rob – guitar
Cliff discovered a new way of playing this old children’s song, and Anna Lisa and I came along for the ride. We often start our practices with a bit of stream-of-thought improvisation, and this is one of the playful outcomes.—Rob